12 May 2022, 11:14
@newsfile Murchison Minerals Invites You to Join Us at The Vancouver Resource Investment Conference $MURMF $MUR

Use of this site indicates acceptance of the Privacy Policy and Terms of Use.
The information on this Website is not reliable and not intended to provide tax, legal, or investment advice. Nothing contained on the Website shall be considered a recommendation, solicitation, or offer to buy or sell a security to any person in any jurisdiction.
CEO.CA members discuss high-risk penny stocks which can lose their entire value. Only risk what you can afford to lose.
© 2022 - CEO.CA Technologies Ltd.
@accesswire/murchison-minerals-quadruples-100-owned-hpm-land-package ↻
0 online
Today This week
Search Subscribe
Members of @accesswire/murchison-minerals-quadruples-100-owned-hpm-land-package

by @accesswire on 8 Dec 2021, 08:00
Murchison Minerals Quadruples 100% Owned HPM Land Package as a Result of the Inaugural Drill Program at the Ni-Cu-Co Project

BURLINGTON, ON / ACCESSWIRE / December 8, 2021 / Murchison Minerals Ltd. ("Murchison" or the "Company") (TSXV:MUR) is pleased to announce the successful completion of the inaugural drill program and acquisition of an additional 43,689 hectares of mineral claims at its 100% owned HPM (Haut-Plateau de la Manicouagan) project, located in Quebec.

Murchison's exploration results in 2021 have demonstrated that the Haut-Plateau hosts significant nickel-copper-cobalt mineralization. Based on these results, the Company has acquired the majority land position in the eastern Haut-Plateau region. With the newly acquired claims, Murchison has now increased the size of the HPM project area by a factor of 4, from 13,897 hectares to 57,586 hectares. The new claims cover an area where rafts of paragneiss reside within a highly prospective assemblage of norite, gabbro, and anorthosite intrusive rocks which host the nickel-copper-cobalt occurrences. These rock assemblages are similar to those rock types found at other prestigious nickel mining camps, such as Voisey's Bay. 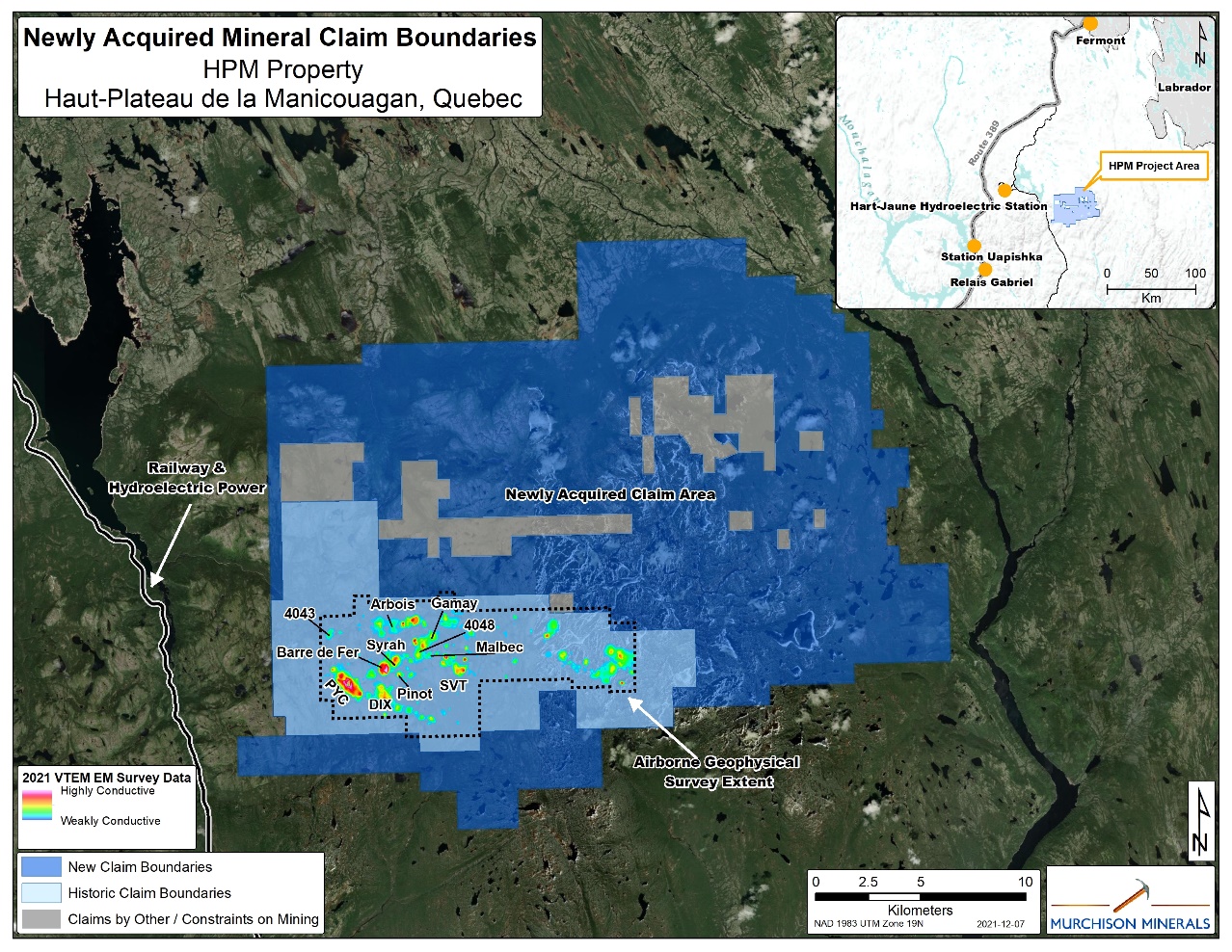 The new claim area is underexplored, and Murchison is eager to collect airborne electromagnetic geophysical data across the new land package. Murchison has demonstrated that airborne electromagnetic surveys are highly effective at locating Ni-Cu-Co bearing sulphide mineralization in the project area. The Company anticipates collecting electromagnetic data throughout the new claim area in the spring of 2022. Moreover, the new claims, along with the existing HPM claims, are located near hydro-electric power sources and rail lines. This will facilitate any future developments potentially net neutral for carbon emissions as well as limiting the environmental footprint by using existing transportation infrastructure.

"Since acquiring 100% ownership of the HPM project in 2019, Murchison has increased the project size of the property by over 400% to a total of 57,586 ha or 576 km2. The significant size increase is a direct result of our confidence in the camp scale Ni-Cu-Co sulphide potential at HPM. This confidence is built on the prospective geology in the Haut-Plateau de la Manicouagan region, the 2021 VTEM geophysical survey results, the highly successful 2021 prospecting and the results from the inaugural drill program at PYC. Furthermore, the HPM project is located in Quebec which is a premier mining jurisdiction and is within kilometres of significant rail and zero-carbon hydroelectric power infrastructure. I am very excited for the Murchison team to unlock the value at HPM at a time when the need for critical minerals is central to the global transition to the new economy."

The inaugural drill program at the HPM project has achieved a major milestone by intersecting sulphide mineralization in all holes in the PYC target area - a geophysical anomaly that extends for a strike length of 1.95km. The Company completed 8 drill holes totaling 1,781 m, effectively only testing 550 m of the anomaly's strike length. The work completed this fall has built upon the Barre De Fer discovery, located only 1.5 km north-east where drilling intersected nickel-copper-cobalt mineralization along a 300 metres strike length, down to a depth of about 280 metres. The best intercept results from the previous work at Barre De Fer were found in hole HPM-08-03 which intersected 43.15 metres grading 1.74% Ni, 0.90% Cu and 0.09% Co.

"Our team is looking forward to receiving the assay results from the 2021 drill campaign which are expected early in the new year. The footprint of the PYC prospect has potential to be a shallow high tonnage mineral zone. We couldn't be more excited to get back to the field in 2022 and continue our work at PYC as well as Barre De Fer and Syrah. The mineralization observed at the PYC target as well as the 2008 work by Murchison's predecessor company Manicouagan Minerals at the Barre De Fer prospect validates the potential for the HPM project to host multiple nickel-copper-cobalt sulphide deposits. The company has multiple encouraging geophysical anomalies on the property that have no previous prospecting work. We are expecting to have a very big year in 2022" 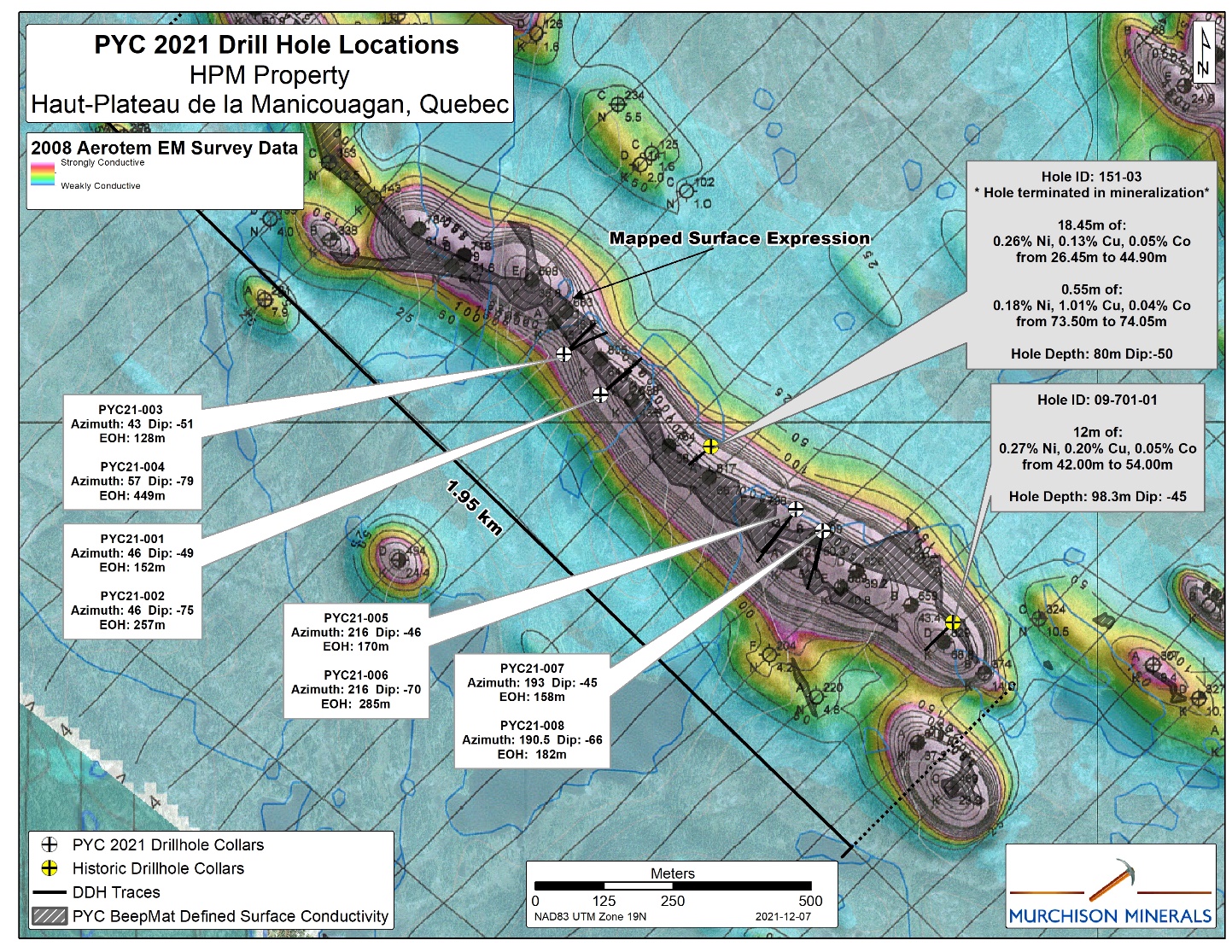 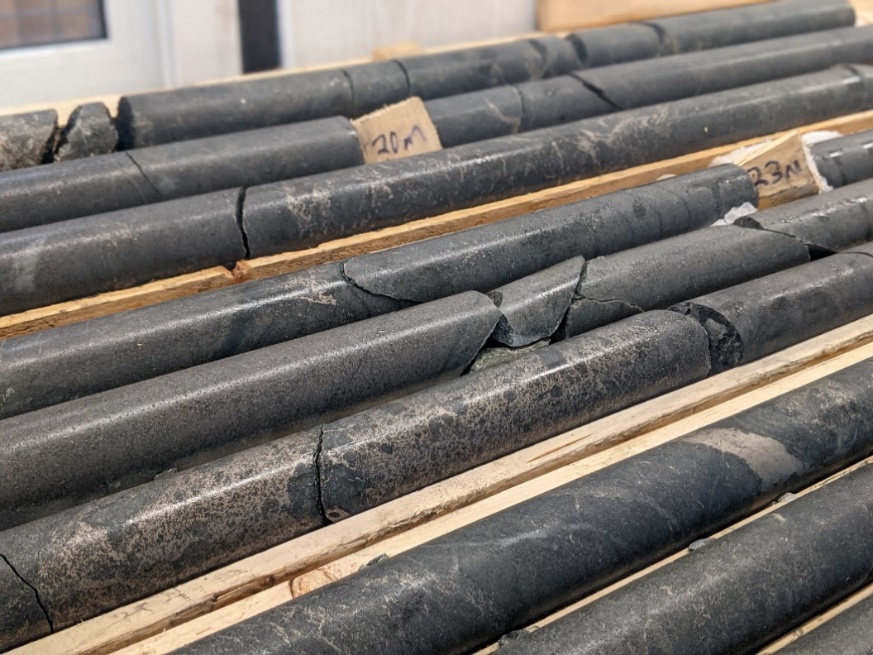 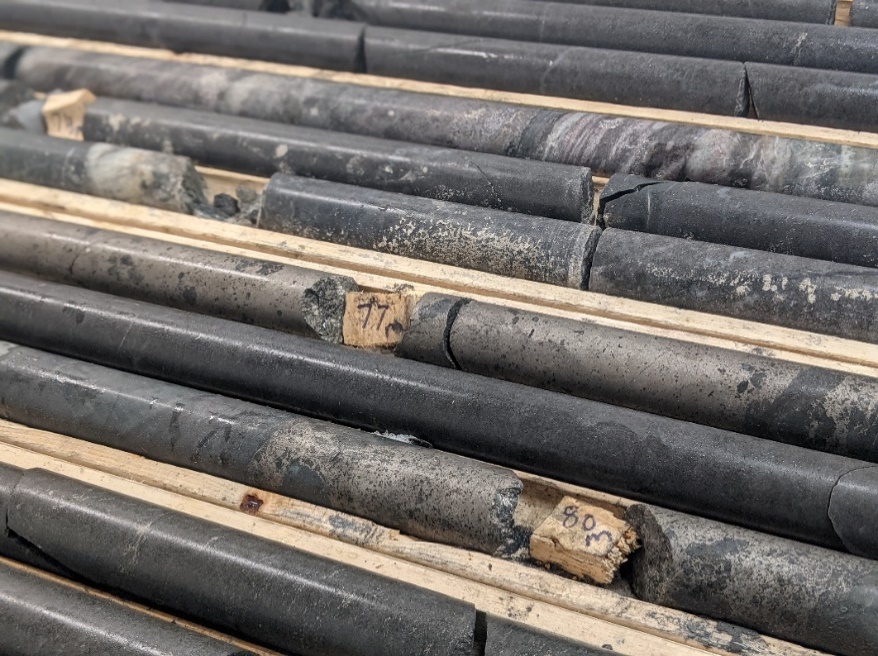 The foregoing scientific and technical disclosures on the HPM project have been reviewed by John Shmyr, P.Geo., VP Exploration, a registered member of the Professional Engineers and Geoscientists of Saskatchewan and current holder of a special authorization with the Ordre des Géologues du Québec. Mr. Shmyr is a Qualified Person as defined by National Instrument 43-101.

About the HPM Project 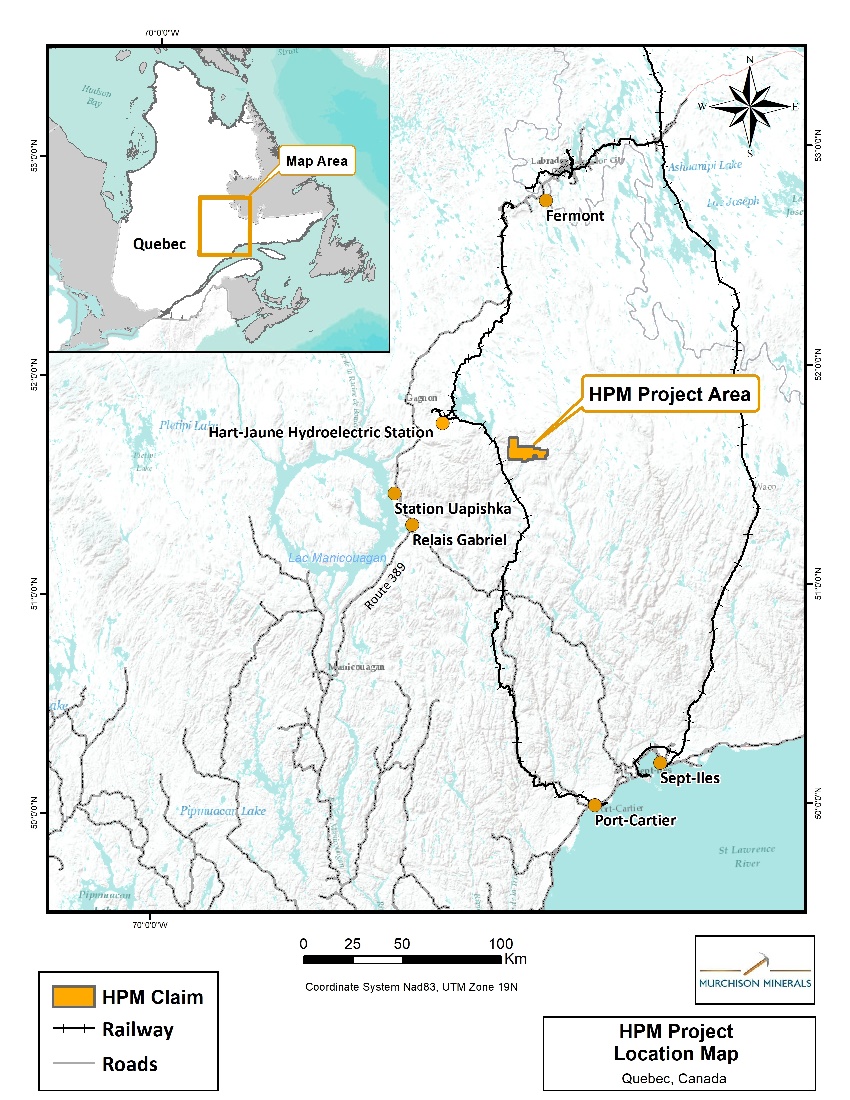 The project is within the Haut-Plateau de la Manicouagan area. The claims host prospective gabbroic, ultramafic and anorthositic bodies within the Manicouagan metamorphic complex and are associated with significant nickel-copper-cobalt mineralization identified in a total of 32 diamond drill holes (6,479 m) completed in 2001-2 and 2008-9.

The majority of the past drilling at HPM targeted the Barre de Fer geophysical conductor and confirmed the known nickel-copper-cobalt mineralization approximately 300 metres along strike and to a depth of about 280 metres.The mineralization remains open at depth and partially along strike.

Murchison is a Canadian‐based exploration company focused on nickel-copper-cobalt exploration at the 100%-owned HPM project in Quebec and the exploration and development of the 100%-owned Brabant Lake zinc‐copper‐silver project in north‐central Saskatchewan. The Company also holds an option to earn 100%interest in the Barraute VMS exploration project also located in Quebec, north of Val d'Or. Murchison currently has 153.6 million shares issued and outstanding.

Additional information about Murchison and its exploration projects can be found on the Company's website at www.murchisonminerals.com.