Use of this site indicates acceptance of the Privacy Policy and Terms of Use.
The information on this Website is not reliable and not intended to provide tax, legal, or investment advice. Nothing contained on the Website shall be considered a recommendation, solicitation, or offer to buy or sell a security to any person in any jurisdiction.
CEO.CA members discuss high-risk penny stocks which can lose their entire value. Only risk what you can afford to lose.
© 2022 - CEO.CA Technologies Ltd.
@nasdaq/ranchero-gold-further-extends-gold-mineralization-by ↻
0 online
Today This week
Search Subscribe
Members of @nasdaq/ranchero-gold-further-extends-gold-mineralization-by

by @nasdaq on 23 Feb 2022, 06:00
Ranchero Gold Further Extends Gold Mineralization by 170 Meters Along Strike With Near Surface Drilling

VANCOUVER, British Columbia, Feb. 23, 2022 (GLOBE NEWSWIRE) -- Ranchero Gold Corp. (“Ranchero” or the “Company”) (TSX.V:RNCH) is pleased to announce the final drill results from its recently completed Phase I drill program at the Maíz Azul prospect which is part of its 100%-owned Santa Daniela gold project located in Sonora, Mexico.

Highlights of the Drill Results:

Maíz Azul is the Company’s most advanced prospect at the broader Santa Daniela gold project which consists of a land package in excess of 22,300 hectares.

Bill Pincus, Chief Executive Officer of Ranchero stated: “We are extremely pleased with the results from our first ever drill program at Santa Daniela. We have demonstrated the presence of gold mineralization in all of the targets that were drill tested including intersecting 4.0 g/t gold over 31.5 meters in drill hole MA 21-10. The recent step-out hole (MA 22-22) demonstrated the presence of gold mineralization for over 260 meters where it remains open eastward at the La Colmena zone.

“We will now take a pause in drilling to update our geologic mapping and three-dimensional models. Continued exploration efforts at Maíz Azul has led to a greater understanding of the stratigraphic column which in turn has led to a better understanding of the major faulting that controls the gold deposition. This will guide our future drilling at Maíz Azul as well as our on-going reconnaissance work in the greater project area at Santa Daniela.”

The Phase I drill program was designed to test two principal targets at Maíz Azul: La Colmena and La Cascada (Figure 1). Drilling at La Colmena intersected gold in both high-grade hydrothermal breccia zones and lower-grade veinlet zones. Step-out drill hole MA-22-22 extended the La Colmena zone eastward a further 170 meters (Figure 2). There was minimal surface geochemical signature and this hole was based on structural trends visible on satellite images. This confirms the importance of structural interpretation in the discovery of new gold mineralization. Drilling at La Cascada generally encountered broader lower grade veinlet-hosted mineralization with only occasional hydrothermal breccias. Ranchero geologists note that this is, according to published reports, similar to the occurrence of gold mineralization at nearby mines which are and have been successfully mined by both open pit and underground methods.

It is also evident from the recent work that the Maíz Azul area has been heavily influenced by both high-angle and low-angle faulting. In some cases, displacement may be as much as 100 to 200 meters. This is evidenced by the missing layers of the volcanic-stratigraphic section identified by field observations and core logging. The discovery of widespread gold mineralization at Maíz Azul together with a greater understanding of the regional and local geology provides confirmation that the Phase I drill program was highly successful.

Ranchero also reports that further sampling of drill holes MA 21-13 and MA 21-14 (as discussed in the press release dated January 26, 2022) has resulted in a slight expansion of a mineralized intercept of MA 21-13. Complete assay results are reported in Table 1.

Ranchero geologists are currently engaged on several fronts at both Maíz Azul and on the reconnaissance of the greater Santa Daniela concession block.

The primary focus at Maíz Azul is on updating and expanding the mapped area. This will provide an enhanced understanding of the structural (fault) controls on the gold mineralization and will be an essential guide for the design of the upcoming Phase II drill program.

Reconnaissance efforts will be focused on those areas close to Maíz Azul that have been identified by remote sensing or other methods. Ranchero, working with GoldSpot Discoveries, is acquiring WaveView 3 satellite data to better identify new potential prospects.

Several areas have already been investigated via field visits. The completed field work in conjunction with newly identified areas, will be prioritized for follow-up sampling, mapping and possibly geophysical surveys. The identification of new drill targets will continue throughout the course of 2022 and beyond.

Scientific and technical information in this news release has been reviewed and approved by William Pincus, CPG, who is a "qualified person" as defined by NI 43-101.

On behalf of the Board of Directors of the Company:

This news release contains certain forward-looking statements. Any statements that express or involve discussions with respect to predictions, expectations, beliefs, plans, projections, objectives, assumptions or future events or performance (often, but not always, using words or phrases such as “expects” or “does not expect”, “is expected”, “anticipates” or “does not anticipate” “plans”, “estimates” or “intends” or stating that certain actions, events or results “ may”, “could”, “would”, “might” or “will” be taken, occur or be achieved) are not statements of historical fact and may be “forward-looking statements”. Forward-looking statements contained in this news release include, but are not limited to, the final acceptance of the TSXV to the Transaction. 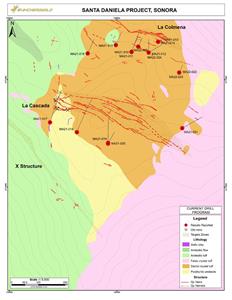 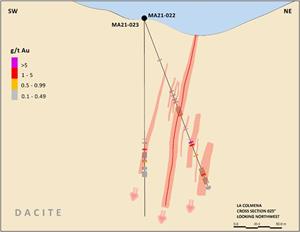