Use of this site indicates acceptance of the Privacy Policy and Terms of Use.
The information on this Website is not reliable and not intended to provide tax, legal, or investment advice. Nothing contained on the Website shall be considered a recommendation, solicitation, or offer to buy or sell a security to any person in any jurisdiction.
CEO.CA members discuss high-risk penny stocks which can lose their entire value. Only risk what you can afford to lose.
© 2022 - CEO.CA Technologies Ltd.
@nasdaq/ranchero-gold-provides-summary-of-successful-inaugural ↻
0 online
Today This week
Search Subscribe
Members of @nasdaq/ranchero-gold-provides-summary-of-successful-inaugural

Bill Pincus, Chief Executive Officer and Director stated: “The success of our first ever drill program at Maíz Azul has confirmed a significant gold discovery at the highly prospective Santa Daniela project. Our team is working tirelessly to prepare our Phase II drill program which will build upon the exploration success that we have had thus far.”

“Exploration efforts are already underway at the greater Santa Daniela project area where a number of new exploration targets are undergoing field visits. There are currently nine targets that are located in close proximity to existing deposits or past producing operations at the neighboring Mulatos Gold mine to the northwest. We look forward to advancing these exploration targets to drill ready prospects in the second half of 2022.”

The Phase I drill program was designed to test two principal targets at Maíz Azul: La Colmena and La Cascada. Drilling has confirmed widespread gold mineralization at both targets and also provided confirmation that high grade mineralization exists within a lower grade halo.

During the course of the drill campaign, Ranchero geologists have expanded their understanding of the Maíz Azul prospect and how it relates to the nearby San Carlos deposit, part of the Mulatos gold mine, owned by Alamos Gold (Figure 1). A greater understanding of the volcanic stratigraphy has allowed Ranchero to identify both the most receptive host rocks and understand the complex post-mineralization faulting.

Ranchero is currently updating and expanding the geologic map of the Maíz Azul area beyond its previous limits – principally eastward. Upon completion, Ranchero will incorporate the new map into its three-dimensional model providing a geologic context for understanding the location of gold mineralization. The goal is to define drill targets for its upcoming Phase II campaign.

Ranchero is also investigating the likelihood that out-cropping gold mineralization extends beneath the cover of volcanic rocks deposited after the gold-forming events. Ranchero believes this may greatly extend the potential footprint for gold mineralization at Maíz Azul.

Planning is well underway for the Company’s Phase II drill program at Maíz Azul. Drilling priorities are to: 1) expand the La Colmena zone eastward; 2) initial drill testing of the X-Structure target; 3) initiate drilling of new targets identified by the on-going modelling; and 4) commencement of resource definition drilling. Currently, Ranchero has budgeted for a minimum 4,000 meters of combined diamond core and reverse circulation drilling.

Expansion of the La Colmena zone will build upon the success of drill holes MA22-22 and MA22-23 (refer to the press release dated February 23, 2022) where Ranchero believes that the principal mineralized structure continues eastward well beyond the known mineralization.

The X-Structure target had been identified earlier but was not tested during the recently completed Phase I drill campaign.   New targets, identified by lithologic and structural interpretation, particularly those not exposed on surface will also be tested. Finally, infill drilling at the La Colmena zone is warranted based on the successful results of the Phase I drill program.

Ranchero is also advancing its regional reconnaissance program on the entire Santa Daniela concession block in tandem with its drilling at the Maíz Azul prospect. Santa Daniela is one of the largest unexplored areas in the Sierra Madre Occidental gold belt and its potential for new discovery is excellent.

An Aster/Landsat satellite-based study conducted by Perry Remote Sensing LLC in 2020 identified the presence of hydrothermal alteration minerals (related to possible gold deposition) at 47 separate locations. Ranchero is currently working with GoldSpot Discoveries (“GoldSpot”) to update its reconnaissance efforts. New ultra-high-resolution imagery from the WaveView3 satellite has been acquired and is being processed to more precisely highlight areas of hydrothermal alteration. Aster satellite data is also being used to identified major faults that control gold deposition. These, together with regional geochemical data, will be integrated by GoldSpot with their proprietary machine-learning technology to refine target areas.

Ranchero has conducted field visits to a number of these areas and has currently identified nine high-priority targets that warrant further field studies including geophysics, alteration studies, detailed mapping, and systematic sampling. It anticipates that additional areas will be added to the priority list based on the work with GoldSpot and will also be reviewed in the field. The priority areas are shown on Figure 2 and are based on the presence of favorable lithology, hydrothermal alteration, geochemical anomalies and proximity to other known third-party prospects. Ranchero will continue its field investigations in parallel with the work conducted at Maíz Azul with the objective of identifying new drill targets by year-end.

Scientific and technical information in this news release has been reviewed and approved by William Pincus, CPG, who is a "qualified person" as defined by NI 43-101.

On behalf of the Board of Directors of the Company:

This news release contains certain forward-looking statements. Any statements that express or involve discussions with respect to predictions, expectations, beliefs, plans, projections, objectives, assumptions or future events or performance (often, but not always, using words or phrases such as “expects” or “does not expect”, “is expected”, “anticipates” or “does not anticipate” “plans”, “estimates” or “intends” or stating that certain actions, events or results “ may”, “could”, “would”, “might” or “will” be taken, occur or be achieved) are not statements of historical fact and may be “forward-looking statements”. Forward-looking statements contained in this news release include, but are not limited to, the final acceptance of the TSXV to the Transaction. 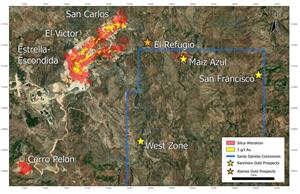 Maíz Azul in relation to the neighboring Mulatos Gold Mine 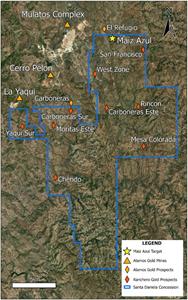 Near mine reconnaissance targets