Use of this site indicates acceptance of the Privacy Policy and Terms of Use.
The information on this Website is not reliable and not intended to provide tax, legal, or investment advice. Nothing contained on the Website shall be considered a recommendation, solicitation, or offer to buy or sell a security to any person in any jurisdiction.
CEO.CA members discuss high-risk penny stocks which can lose their entire value. Only risk what you can afford to lose.
© 2021 - CEO.CA Technologies Ltd.
@newswire/meridian-confirms-new-extensive-untested-copper-polymetallic ↻
0 online
Today This week
Search Subscribe
Members of @newswire/meridian-confirms-new-extensive-untested-copper-polymetallic

/NOT FOR DISTRIBUTION TO U.S. NEWS WIRE SERVICES OR FOR DISSEMINATION IN THE U.S./

"These exciting new results including fresh chalcopyrite at surface, are highlighting new target areas along the 11km Mine Corridor, between the Cabaçal and St Helena mines", commented Dr Adrian McArthur, CEO and President. "The presence of historical geophysical anomalies extending down-dip and along strike from these strong geochemical responses adds further context to Cabaçal's defined but untested exploration upside, that starts "at surface" (a near surface upside that was once typically found in the world's VMS camps, but most of which are now exhausted or in decline). Our in-house team has initiated a program with our modern electromagnetic survey equipment to focus ongoing exploration efforts and build multiple drill targets in this exciting new area. These targets highlight the wealth of opportunities and upside of Cabaçal's camp-scale Copper-Gold Project, consistent with our expectation that significant targets remain to be tested and discovered over the greater 36km's of prospective VMS stratigraphy."

A broad area of interest termed "C2A" was first established by BP Minerals ("BP") from its historical gold focused exploration in the 1980's. C2A is centred approximately 3km SSW of the Cabaçal Mine. BP conducted a program of mapping and soil sampling detecting anomalies with variable Cu, Cu-Au, Zn-Cu-Pb values; Ag was not assayed for (Areas 1 - 4, Figure 1). Local surface geophysics identified conductivity and chargeability anomalies. The C2A area was never targeted by historical drilling campaigns.

Meridian has conducted initial exploration programs of infill and extensional soil surveys complemented by reconnaissance mapping and rock chip sampling. The ongoing activity includes a trenching and fixed-loop geophysical surveys with the Company's in-house team. Results from the trenching program are pending.

An initial geological reconnaissance program has confirmed a 1.5km long copper prospect: "Area 1" within the C2A target ("C2A-1"). Peak rock chip results were 0.4% Cu, 0.2% Zn (CBRO00027) and 0.4% Zn – 855 ppm Cu (CBRO00007). Chalcopyrite-pyrite –bearing mafic rocks have been located at surface and are associated with gossanous quartz veins, indicating a hydrothermal overprint (the Cabaçal Copper-Gold VMS system has a stringer-disseminated stratigraphy cut by a later stage veining event containing the recent high-grade Au results). The rock chip samples including those with surface chalcopyrite present are highly encouraging in an area with limited exposure. Historical maps show a chargeability anomaly close to the CBRO00007 sample site, and a NNE-SSW alignment of conductivity responses from historical surveys along strike from the CBRO00027 sample site. Detailed data from these geophysical surveys are no longer available, and the trend will be covered using Meridian's modern electromagnetic survey equipment.

Reconnaissance mapping in Area 4 within the C2A target region identified samples of chloritized schists and breccias, associated with a higher-amplitude Copper in soil response extending over two 200m spaced lines with a peak value of 0.10% Cu. An offset corridor of EM conductivity peaks in a Northwest-southeast orientation, is seen 550 – 800m Southwest and downdip of Area 4. A modern surface EM survey will be completed over this area targeting a likely zone down-dip from the Copper-anomalous horizon. 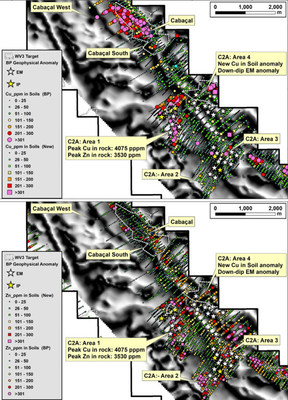 This sampling program covered a 2.8 km gap in the BP soil coverage. Samples extending into the Southwest quadrant of the corridor show a Zinc anomaly approximately 1000m along strike from the "Succuri" VTEM conductor, peaking at 906 ppm Zn.

The C2A prospect will be systematically covered by surface electromagnetic surveys and then scheduled for a regional test drill program in the year ahead following the definition work at Cabaçal and its immediate extensions.

Dr. Adrian McArthur, B.Sc. Hons, PhD. FAusIMM., CEO and President of Meridian Mining as well as a Qualified Person as defined by National Instrument 43-101, has supervised the preparation of the technical information in this news release.

Stay up to date by subscribing for news alerts here: https://meridianmining.co/subscribe/

Further information can be found at www.meridianmining.co

Soil samples have been analysed by Meridian by Reflex portable XRF, in a program which involved use of analytical standards, blanks and duplicates. Samples are collected from the B horizon and screened to separate the fine fraction.  10% of samples are submitted to SGS for verification of base metal analysis. Results are monitored to ensure anomalies plot in a correct order of magnitude. Lines are extended over prior BP  minerals  soil sample sites and show that the position and threshold or the response is appropriate for outlining anomalies. Rock chip samples have been analysed at SGS through method ICP40B for base metals, Silver is repeated with method AAS12E, and gold is analysed through fire assay of a 50 g charge by method FAA505. Standards, blanks, and duplicates accompany the rock chip sampling program.

Meridian Mining UK S is focused on the acquisition, exploration, and development activities in Brazil. The Company is currently focused on resource development of the Cabaçal VMS Copper-Gold project, exploration in the Jaurú & Araputanga Greenstone belts located in the state of Mato Grosso; exploring the Espigão polymetallic project and the Mirante da Serra manganese project in the State of Rondônia Brazil.

Some statements in this news release contain forward-looking information or forward-looking statements for the purposes of applicable securities laws. These statements include, among others, statements with respect to the Company's plans for exploration, development and exploitation of its properties and potential mineralization. These statements address future events and conditions and, as such, involve known and unknown risks, uncertainties, and other factors, which may cause the actual results, performance, or achievements to be materially different from any future results, performance or achievements expressed or implied by the statements. Such risk factors include, among others, failure to obtain regulatory approvals, failure to complete anticipated transactions, the timing and success of future exploration and development activities, exploration and development risks, title matters, inability to obtain any required third party consents, operating risks and hazards, metal prices, political and economic factors, competitive factors, general economic conditions, relationships with strategic partners, governmental regulation and supervision, seasonality, technological change, industry practices and one-time events. In making the forward-looking statements, the Company has applied several material assumptions including, but not limited to, the assumptions that: (1) the proposed exploration, development and exploitation of mineral projects will proceed as planned; (2) market fundamentals will result in sustained metals and minerals prices and (3) any additional financing needed will be available on reasonable terms. The Company expressly disclaims any intention or obligation to update or revise any forward-looking statements whether as a result of new information, future events or otherwise except as otherwise required by applicable securities legislation.

The Company cautions that it has not completed any feasibility studies on any of its mineral properties, and no mineral reserve estimate or mineral resource estimate has been established. Geophysical exploration targets are preliminary in nature and not conclusive evidence of the likelihood of a mineral deposit.